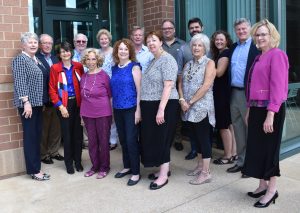 As the Chattanooga Theatre Centre closes in on its 100th anniversary, this mainstay in the lives of many theatre-goers in the community is taking steps to ensure its next 100 years.

That initiative recently took shape with the launch of the Second Century Society, which aspires to identify supporters who have decided to make a planned gift or a gift to the non-profit community theatre’s endowment.

Inspired by a generous gift from the estate of Alice Probasco Lupton, the Second Century Society has attracted 17 charter members, surpassing its original goal in less than a year’s time.

“The Theatre Centre is one of only a handful of community theatres in this country that have survived about 100 years, and the theatres who will last another 100 years all have a body like our Second Century Society,” says Executive Director Todd Olson. “That’s how important this inaugural group is.”

The Second Century Society is appealing to potential donors to leave a legacy that maintains the culture of a quality, community-minded theatre. The Theatre Centre was founded in December 1923 as the Little Theatre and staged its first show, “Dear Me,” in April 1924. Today, the CTC plays to over 30,000 patrons attending adult and youth productions each season.

“A community without live theatre is not complete,” Henderson says. “The CTC contributes to the richness of our community in many ways, including education, diversity, economically, and through opportunities for all to participate in the creative process we call theatre. I don’t think it gets more important or special than that.”

Henderson says the Second Century Society welcomes gifts of any size, which has made this giving opportunity within reach for any member of the theatre family. Donors can make a bequest to the CTC in their will or trust or by designating the CTC as a beneficiary of their retirement account or insurance policy.

Among the charter members of the Second Century Society are Bryan and Mindy Kelly, who are dedicated supporters of the arts throughout the community.

Bryan says, “When I first moved to Chattanooga, on a whim I tried out for ‘Beauty and the Beast’ having never done anything like that before, and I was cast as the Beast. Since then, I have found a tremendous family at the CTC and I know that the encouraging, uplifting, and empowering spirit that I have felt in my time is being instilled and fostered in everyone that is lucky enough to participate in a CTC production. From the CTC’s Youth Theatre to its community outreach and its collaborations with other groups and organizations, my wife and I are proud to be a part of supporting CTC‘s next 100 years.”