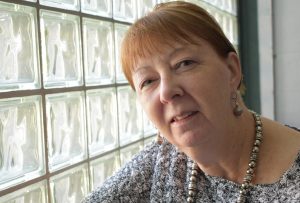 Becki, a longtime CTC volunteer herself, has just joined the staff as volunteer coordinator and in that capacity is working to expand and revitalize the theatre’s volunteer base. She is taking several approaches to accomplishing this goal, one of which is to enlist more educators and students.

“We have a number of volunteers who are educators,” she says. “I’d like to work more closely with them and help students who have community service requirements get involved.”

The CTC also relies heavily on parent volunteers. Most are parents of children involved in Youth Theatre productions or in a production that includes a large cast of children, such as this season’s opener, “Matilda.”

“Over the years, we’ve had a lot of families that will volunteer together,” Becki says. “It’s always good for the parents to be able to work on the same project with their kids.”

Becki also says she is reaching out to past volunteers who became inactive due to work or family obligations but whose circumstances have now changed. “I want them to know they are still welcome and there is still a place for them,” she says.

There are many different roles volunteers can play, Becki says. Aside from acting on stage, the theatre needs technical and running crew help backstage for shows. She says for the upcoming production of “Mary Poppins,” the theatre will need reliable volunteers for extra technical crew.  “We need people who can consistently be available throughout rehearsals and the run of the show,” she says.

The CTC also needs volunteers to assist with set building in the scene shop, costume building in the costume shop, ushers, and administrative help such as addressing envelopes for fundraising campaigns. Becki says if you are willing to donate your time, the CTC will find a place for you to volunteer and will gratefully welcome your help.

Becki’s capacity as the volunteer coordinator seemed a natural transition for her due to her long volunteer history at the theatre. She is a Chattanooga native and following her graduation from Tennessee Wesleyan College with a degree in theatre, she returned home and “volunteering at the theatre just seemed like the right thing to do,” she says.

Becki began working and studying with Nancy Lane Wright at her studio, the Dance-Theatre Workshop. During this time, Wright choreographed many of the musical productions at the CTC. “Whenever she was working on a show at the theatre, she would bring everyone from the workshop over to perform in the show,” Becki says. “An Evening with the Other Sex” in 1975, a play featuring women’s roles throughout history, was the first CTC play in which she was involved.

“It was really here that I learned how to act,” she says. “My degree was in theatre and I knew a lot about theatre history and stage managing. Nancy got my feet wet with performance. But I started watching everyone around me on stage here at the theatre and I really learned a lot about acting from them. I owe them a big debt.”

The “family feeling” from a few particular casts has been very meaningful, especially the cast of “Rumors” in 2002. The Neil Simon comedy ran at the CTC not too many months following the 9/11 tragedy, giving the community the light-hearted production it very much needed. It was also not long after the loss of her mother. “Coming back into that cast with everyone around me, well, it was wonderful to have that kind of support,” she says.

Becki has continued to act and be involved in dozens of plays at the CTC and has served on the theatre’s Board of Directors for a number of years. In addition to her work at the CTC, Becki has served on the vestry of Grace Episcopal Church and has been a board member in years past with the Dance-Theatre Workshop and the Ensemble Theatre of Chattanooga.

She recently retired from her position as a contract analyst in the legal division at BlueCross BlueShield of Tennessee. While serving on the CTC board, she organized front-of-house volunteers. So, when the board determined that there was a need for a volunteer coordinator, she decided to pursue the job.

Becki is working hard to reach prospective volunteers with the message, “You are welcome and there is a place for you here. Everyone is welcome here. You don’t have to be on stage. There are many places to help offstage too.”