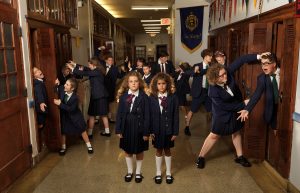 It’s not easy being a kid. Especially when your parents are crude, TV-addicted, book-bashing scoundrels and your heartless headmistress has a fondness for torturing children. Such is the plight – and plot – of the mischievous and magical “Matilda,” a Tony Award-winning musical which opens the Chattanooga Theatre Centre’s 2019-2020 season on Friday, September 20.

Inspired by the twisted genius of children’s author Roald Dahl (“Charlie and the Chocolate Factory” and “James and the Giant Peach”), the wonderfully quirky “Matilda” is an exhilarating masterpiece about an extraordinary little girl who, armed with a vivid imagination, a sharp mind, and psychokinetic powers, dares to take a stand and change her own destiny. She’s unloved by her cruel parents, but her intelligence and astonishing wit impress her loveable schoolteacher.

Her school life isn’t smooth sailing, however. The mean headmistress hates children and throws them around the playground and confines them to a spike-filled chest called The Chokey. But Matilda has courage and cleverness in equal amounts, and could be her schoolmates’ saving grace.

Playwright Dennis Kelly and musician-composer Tim Minchin have done a gloriously over-the-top job capturing the wit and heart of Dahl’s tale, which is set in an English village. Packed with high-energy dance numbers, catchy songs, and an empowering message of daring to stand up for what’s right, “Matilda” is a joyous girl-power romp.

They lead an energetic cast of 15 children and 11 adults, including two 10-year-olds who share the title role. Libbie Weaver and Anay Philips, double-cast as the precocious Matilda, will appear in alternating performances.