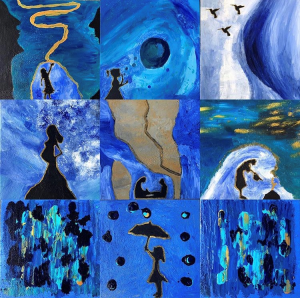 As a celebration of the arts beyond what we produce on the stage, the Chattanooga Theatre Centre will feature 12 local artists and a collection of works by African-American artists on our gallery walls during the upcoming 2019-2020 season.

The move is part of the multi-faceted theatre experience that the Theatre Centre aims to provide its patrons.

“For the past three years, we have tried hard to open our doors wide to other kinds of artists, especially Chattanooga-based artists,” says CTC Executive Director Todd Olson.

During the 2018-2019 season, the theatre showcased work from the Hart Gallery, and the season before, work from AVA. Works were exhibited on gallery walls in the lobbies outside the CTC’s two theatre spaces.

“This year, we chose to reach out to individual artists and were deluged with submissions,” Olson says. “The results have been exciting, and I know CTC patrons will encounter many fascinating works of art on our gallery walls when they come to the theatre.”

Austin McDougal’s work will be featured during the CTC’s season-opening run of Roald Dahl’s MATILDA from September 20 through October 13. Austin is a 23-year-old oil and acrylic painter who draws his inspiration from many sources, people, places, events, and ideas.

Jennifer Coots will be featured during the CTC run of LION KING, JR. from October 25 to November 3. Jennifer calls herself a “free spirit,” and her art is inspired by magic “hiding beneath all the noise of the world and splattered on the canvas.”

Sarah McCune’s paintings will be featured during the run of MARY POPPINS, November 22 until December 22. Sarah’s art explores the intersections of creation of other worlds, spirituality, loss of innocence, and human discovery. She is a full-time teaching resident at Howard High School in 9th and 10th grade English language arts. (One of her works accompanies this post.)

Shelley L. King and Cecilia King will be the featured artists during James Baldwin’s THE AMEN CORNER, December 6-22. Shelley has been a professional photographer for the past eight years and shares a passion for street photography, photographing events and structures around the Chattanooga area. The Kings believe their work as photojournalists documenting special places and people around Chattanooga will last longer than their lifetime. Their passion is preserving the present moment for future generations.

In celebration of Black History Month, the CTC will present a collection of visual art work created by various local African-American artists. The opening of the exhibition will coincide with opening night of August Wilson’s GEM OF THE OCEAN, which runs January 24 until February 16. The show will conclude with an artist meet-and-greet on Friday, February 21, at 6:30 p.m.

Carina Miller will be the featured artist during the run of THE LION, THE WITCH AND THE WARDROBE from February 21 until March 1. Carina is a 14-year-old artist who loves creating realism on paper and canvas using ink, charcoal, and pastels. She has earned several awards, including at the Hamilton County Fair and the Duck Stamp Contest.

Brooke Craig will be the featured artist during CTC’s production of Agatha Christie’s THE HOLLOW, which runs March 13-29. After waking up paralyzed at age 11, Brooke was diagnosed with a rare neuroimmune disorder, beginning her journey with disease. During inpatient treatment, she was introduced to art as a way of coping with her external and internal struggles. This led to a life-long practice of using art as a way of understanding the diseased body.

Jackson Case will be the featured artist during CTC’s Neil Simon play LAUGHTER ON THE 23RD FLOOR, running March 27 through April 19. Jackson is a multidisciplinary artist working primarily in photography and sculpture. At its core, his work is about light and time and is greatly influenced by growing up in and around a large city, while also spending a great deal of time outside in nature.

Kory Russell will be the featured artist during CTC’s Youth Theatre production of Dr. Seuss’s THE CAT IN THE HAT, May 5-17. Kory often employs jest and surrealist elements in his work to increase the imaginative space in the work. He loves old things, from his 17-year-old dog to his 51-year-old truck, from jazz to boxing, in short, the ingrained narrative of things that have withstood time.

Keelah Jackson and Jody Harris, also known as Keeody Art, will be the featured artists during CTC’s production of DREAMGIRLS, May 29 through June 21, which will coincide with the Black Arts and Ideas Festival. This duo has created groundbreaking and texture-rich pieces for well over 20 years; their art offers art, love, and soul to the public in the form of inspired and original mixed-media compositions.

Kathleen Pacenti will be the featured artist during the CTC’s production of MAMMA MIA from July 17 to August 9. Kathleen teaches kindergarten through 5th grade art at Ooltewah Elementary School and Belvoir Christian Academy through a program called Children’s Art Place. Her work consists of bright vivid colors and light. She enjoys playing with color and exploring the world of mixed media.