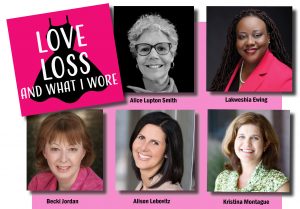 Women’s relationships and attire—and at times the interaction of the two—use the female wardrobe as a time capsule of a woman’s life in the Chattanooga Theatre Centre’s upcoming benefit performance of the comedy, “Love, Loss and What I Wore,” on Saturday, August 10. The show is back by popular demand after a capacity audience was wowed by the show in March.

The show, presented as a staged reading, consists of 28 interwoven stories that seek to illuminate the female identity. Through a series of humorous and often poignant monologues, the actresses share their characters’ stories, exploring themes of relationships, oppression, loss of loved ones, divorce, sexuality (particularly relevant in the Me Too era), and the fullness of life through the metaphor of the characters’ love/hate relationship with clothes.

The evening, a fundraiser for the theatre, will include an elaborate spread of hors d’oeuvres and dessert bites. The reception begins at 7 p.m. and the performance begins at 8 p.m. The show is rated R for mature language and themes.