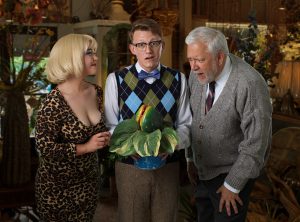 Feed the need for musical hilarity with the Chattanooga Theatre Centre’s production of a “Little Shop of Horrors,” a deviously delicious sci-fi smash about a man-eating plant, opening Friday, July 12, and running through Sunday, August 4.

A tongue-in-cheek Broadway and Hollywood musical with a taste of a B-movie melodrama, “Little Shop of Horrors” has devoured the hearts of theatre goers for over 30 years. Before moving on to Disney fame, composer Alan Menken and writer Howard Ashman reimagined a 1960 movie of the same name for the stage, which premiered Off-Broadway in 1982. It inspired a 1986 film adaptation and ultimately became one of the longest-running productions in Off-Broadway history.

The Theatre Centre brings to the stage this comic musical, which features an electrifying 1960’s pop/rock, doo-wop, and Motown score performed by a cast of 14, including a Greek chorus that guides the audience through the story, and a live band of local musicians.

As the story goes, meek Seymour Krelborn is working as a clerk in cranky Mr. Mushnik’s run-down flower shop on New York City’s Skid Row. Feeling worthless and unappreciated, things take a turn for the better when he stumbles across a new breed of plant resembling a Venus flytrap at a local market. He buys the strange plant, names it Audrey II after his co-worker crush, and places it in his employer’s shop window to attract customers. His plan works, and soon masses of patrons flock to the store to see the mysterious plant.

What Seymour neglects to mention is that the foul-mouthed, R&B-singing plant has an unquenchable thirst for human blood, which multiplies its growth from a tiny potted plant to a human-sized monstrosity. As long as Seymour keeps feeding its appetite, the menacing plant promises him fame, fortune, and most of all, the love of his co-worker Audrey.

Audrey, a pretty ingénue whose fashion sense leans toward the tacky, has problems of her own, secretly longing to leave her abusive boyfriend, a sadistic dentist who drives a motorcycle, wears leather, and enjoys bringing other people pain. A perfect meal for a man-eating plant.

Over time, Seymour discovers Audrey II’s out-of-this-world origins and intent towards global domination. The madness culminates with Seymour and his bloodthirsty plant in a feeding frenzy of epic proportions.

The character of Audrey II is played by a series of increasingly large puppets, one a small potted plant, the second slightly larger, and the third large enough to hide a person inside (Annabel Hudgins and Makenna Jordan in alternating performances). The puppeteers move the plant’s mouth in sync with Audrey II’s voice, supplied by an offstage actor (Donel Solomon).