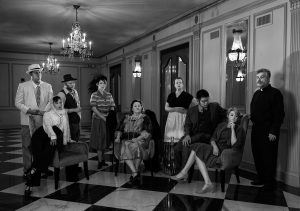 Idyllic surroundings are shattered by a shocking murder as one would expect from an Agatha Christie mystery story, but with the Chattanooga Theatre Centre’s interpretation of the celebrated writer’s “Murder on the Nile,” opening May 17 and running through June 16, you might feel that you’ve been dropped into the middle of a classic film of yore, not a classic whodunit on the stage.

Guest director Courtenay Gillean Cholovich’s vision for this 1944 favorite of Christie fans has given the CTC stage production an unmistakable film noir twist, a choice reflected through the gray tones of the set and costumes, the use of silhouette, the lighting effects, and the actors’ performances.

Nonetheless, this is live theatre at its best, with a delicious murder mystery giving every character the opportunity to show their best (and worst) selves.

“I was struck by how the language of the play translates from what we know and are used to seeing to the sounds, vocabulary, and cadence of the film noir features of the same era,” Cholovich says. “With this production, I hope to capture the essence of the 1940s genre and translate the black-and-white big screen to live performance both through performance and design elements. The visual and aural soundscapes heighten the sense of mystery and intrigue surrounding the play.”

“Murder on the Nile,” often hilarious and genuinely puzzling, is based on Christie’s 1937 novel “Death on the Nile.” Christie has a wide body of bestselling thrillers and several popular plays to back up the claim that she’s one of the greatest mystery writers of all time.

The entirety of “Murder on the Nile,” considered one of her best, takes place on the observation deck of the Lotus, a paddle steamer chartered by a group of English aristocrats. Nine passengers board the craft, which is heading down the Nile River. Not all will return, of course. What starts as a pleasant diversion to see the sites becomes a thrill ride of jealousy, suspicion, and murder.

We meet Simon Mostyn, who has recently married socialite Kay Ridgeway, a young woman blessed with beauty and enormous wealth. Their honeymoon voyage introduces them to a host of memorable passengers. There is the wealthy old snob and her awestruck niece, the disgruntled gentleman, the foreign doctor, the priest, the maid, and a woman obsessed with the new Mrs. Mostyn’s husband. At various times, each of them seems quite capable of murder.

Fatal circumstances await when the tranquil setting is upended by the brutal murder. The tension and claustrophobia build as a shocking conspiracy is laid bare.