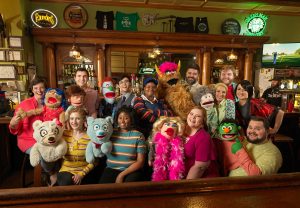 What is not unusual about the Chattanooga Theatre Centre’s production of the Tony Award-winning musical comedy “Avenue Q” is that it follows a motley group of New York twenty-somethings who face life’s challenges together, struggling to find jobs, dates, and their elusive purpose in life.

What is unusual about the irreverent farce, which opens May 3 for seven performances only, is that three actors share the stage with a group of raunchy, foulmouthed, politically-incorrect puppets, operated and voiced by other actors in full view of the audience. The show runs through May 12.

Any likeness to a long-running public television children’s show is unquestionably implied, but the content – adult themes, colorful language, racy humor, and a brief suggestion of puppet-to-puppet intimacy – confirms that “Avenue Q” is not intended for young audiences.

The musical follows the story of a bright-eyed college grad named Princeton (a puppet), who arrives in the city with big dreams and an empty bank account. He moves into a run-down apartment way out on Avenue Q, where he meets a host of odd neighbors (mostly puppets) who are struggling to find their way too.

There’s Kate Monster (his girl-next-door love interest), Lucy (a promiscuous woman), Rod (a closeted investment banker), Nicky (a slacker just out of college), Trekkie Monster (a lecherous grouch who surfs the internet all day), the Bad Idea Bears (who urge Princeton to make poor choices), Gary Coleman (yes, that Gary Coleman), and others. He soon discovers that, although the residents seem nice, it’s obvious that it’s not your average neighborhood.

It should be stressed, however, that this show is rated R and contains mature themes, mature language, and mature situations for mature audiences.