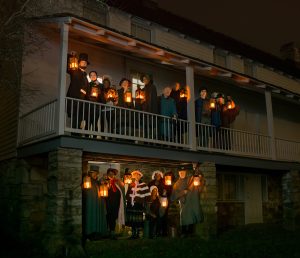 The Chattanooga Theatre Centre shares the warmth of the season in “A Civil War Christmas: An American Musical Celebration,” a dramatic blend of history and traditional song in which Pulitzer Prize-winning playwright Paula Vogel shows that the best of human nature comes out during Christmas. Set in 1864 with the nation at war, the still heartwarming play comes to the Mildred M. Montague Circle Theatre stage Dec. 14-30.

Set on a cold Christmas Eve, the play’s series of interlocking stories weaves a tapestry of both fictional and historical characters, such as President and Mrs. Lincoln, Generals Lee and Grant, John Wilkes Booth and Walt Whitman—together with holiday music, hymns, and spirituals of the period—to tell a story of compassion, reconciliation, and hope through intimate moments and larger events.

As the story opens, it seems like all Americans prepare for the holiday as best they can—Union and Confederate soldiers, slaves and freemen, as well as the White House inhabitants. It’s a chilly Christmas Eve in Washington, D.C., but the chill derives not only from the frigid temperatures. President Lincoln has recently won re-election, and preparations are under way for his second inauguration. But the country is still divided by war, and troops on both sides are hunkered down for a cold night with little hope of peace.

The story continues with Mary Todd Lincoln and her companion, freewoman Elizabeth Keckley, attempting to secure a Christmas tree, a new fashion imported from Germany. But there are no trees to be found; they have all been cut down for fires to warm the troops. On one side of the Potomac, the president defies his security and rides alone on the streets of D.C. On the other side, an escaped slave hurries her daughter toward freedom. Beyond the city, Robert E. Lee and his increasingly disarrayed Confederate troops and Ulysses S. Grant and his marginally better supplied Union soldiers face hardship on the cold winter night.

But when the ensemble’s voices join together in song, there arises from these stories set during one of the nation’s darkest hours a deep sense of wonder at the survival of faith and humanity even in hearts ravaged by loss.