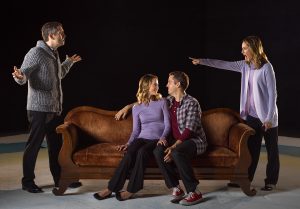 When the Chattanooga Theatre Centre brings the intimate musical “The Last Five Years” to the stage on Friday, Oct. 19, audiences will see the five-year life of a relationship from beginning to end, or from end to beginning, depending on how you look at it.

Written by Tony Award-winning lyricist Jason Robert Brown, the show follows two 20-something New Yorkers who meet, fall in love, marry and divorce over the span of five years. Reinventing the familiar formula of the musical love story, “The Last Five Years” has an unconventional structure, with the story told from both perspectives but moving gracefully in opposite directions.

The man, Jamie, an up-and-coming novelist, tells their story chronologically, starting with their first infatuation and following through to their ultimate breakup. The woman, struggling actress Cathy, relates their story in reverse, starting with the end of the marriage and moving backwards until their first meeting. It is only in the middle of the show that Jamie and Cathy come together, at their wedding.

With the story told almost entirely through song, the music – mostly solos ­– is alternately humorous and heartfelt.

Since its Off-Broadway premiere in 2002, “The Last Five Years” has enraptured audiences around the world with its spellbinding score and libretto. It has become an obsession for fans who return to see it multiple times at any opportunity. A 2014 film adaptation was a popular success.

The Theatre Centre production, staged in the Mildred M. Montague Circle Theatre, runs Oct. 19-28. Under the helm of guest director Garry Lee Posey and with choreography by the Pop-up Project, the CTC opted to introduce dance to tell the unspoken parts of the story.

Jordan Otis, who Theatre Centre audiences saw as Belle in last season’s “Beauty and the Beast,” appears as Cathy. John Thomas Cecil makes his CTC debut as Jamie. Portraying the characters through dance are Jessi Faircloth and Kyle Dagnan.