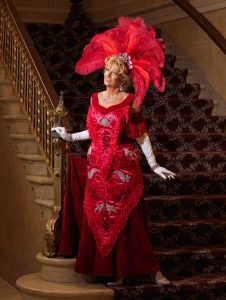 Hello, fun! That’s what the Chattanooga Theatre Centre’s season-ending production of the Broadway blockbuster musical “Hello, Dolly!” promises to be when it hits the stage on Friday, July 13. The musical comedy, which boasts some of the greatest songs in musical theatre history, continues its run through Sunday, August 5.

“Hello, Dolly!”, which first opened on Broadway in 1964, is currently enjoying a hit revival in New York City, winning honors at last year’s Tony Awards including Best Revival of a Musical. Theatre Centre director Scott Dunlap is shaping an equally spectacular show, drawing from Thornton Wilder’s original play “The Matchmaker” on which the musical is based to make the CTC production as farcical, humorous and broadly comic as it can be.

“Hello, Dolly!” is the story of Dolly Levi, an enterprising and widowed matchmaker making her way in New York City at the turn of the century. Among her many gigs, she is brokering the match between lady milliner Irene Molloy and Yonkers-based animal feed merchant and miserly “half-a-millionaire” Horace Vandergelder. Or so it would seem. Dolly actually plans to wed Horace herself so she can spread his money around “like manure.” She’ll have to make it seem like it was his idea first, though.

When Mr. Vandergelder leaves Yonkers for New York City to pay suit to the widowed Mrs. Molloy, his clerks, Cornelius and Barnaby, decide to take an unauthorized holiday themselves and seek adventure in the big city. Their mischief leads them to close encounters with Mr. Vandergelder and a double date at the most expensive restaurant in New York. It is there at the Harmonia Gardens where Dolly makes her grand entrance to a triumphant production number of the title song “Hello, Dolly.” An ensemble of dancing waiters, who perform with dazzling precision and breakneck speed, greet her, which invariably brings down the house.

Dolly’s meddlesome matchmaking and Mr. Vandergelder’s clerks’ comic attempts to avoid an encounter with their boss, while courting Mrs. Molloy and her young shop assistant themselves, result in madcap hilarity.

Back in Yonkers, a subdued and thoughtful Horace realizes that Dolly is the wonderful woman he wants to be his wife. Dolly convinces him to take Cornelius as his business partner, and then finally agrees to marry him—as she had intended all along.

Starring in the title role of Dolly is Theatre Centre favorite Beth McClary, who has showcased her comic sensibilities in several CTC musicals, most recently December’s “Beauty and the Beast.” Rob Inman, a versatile actor who has appeared in more than 30 Little Theatre/Theatre Centre productions since 1978, follows up a touching performance in the spring’s “The Glass Menagerie” with a turn as Horace Vandegelder in “Hello, Dolly!”

Reservations are highly recommended. For tickets, call the Theatre Centre box office at (423) 267-8534 or visit TheatreCentre.com.